Nell, or Helen Barham, as was her given name, writes lovingly of her parents, and this was their bedroom. Tragically both of them died while residents in the house. When Nell came out of her influenza-induced coma, she learned that her 55-year-old mother had contracted the illness and died from it. Three months later her father suffered a fatal stroke. At the time, Nell was near the Arctic Circle filming Back to God's Country. The Los Angeles Daily Times reported on the death of the famous movie star's father, noting, "there is no way of carrying the sad message to Miss Shipman except by dog train and across more than 400 miles of snow and ice."

Nell was not able to be with her parents at their deaths or at their funerals at Forest Lawn, a tragedy which she refers to in The Silent Screen as creating, "a tidal wave of sorrow [that] lasts for decades."

She attributes to her father her love of storytelling, skills in outdoors survival, and swimming abilities. She writes with gratitude towards her mother for supporting her early ambition to act. When she left home at the age of 13 to join a traveling theatrical company, her mother went along to sew and cook for her. 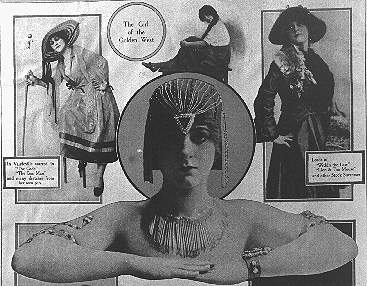 Collage of Shipman in vaudeville and in stock companies, where she acted, sang, and played the piano. Nell Shipman Archives, Boise State University.