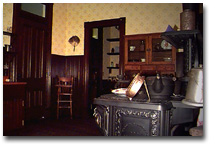 The Shipmans' kitchen was, of course, more modern than this turn-of-the-century restoration. They had a gas stove, instead of the 1896 coal- and wood-burning cast-iron stove seen in the foreground. Mrs. Barham did most of the cooking for the family, preparing elaborate Victorian-style meals. After her death, Mr. Barham would prepare and serve informal meals in the kitchen, which Barry remembered with fondness. He told us, "I used to clown while eating long spaghetti to make my grandpa laugh." 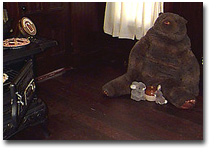 Why are rabbits and a bear in the Shipman's kitchen? The rabbits illustrate a story in The Silent Screen about a pair of rabbits that the animal-loving Mr. Barham bought. He bred them during the meat-scarce WWI days, eventually owning 90 rabbits in hutches in the side yard.  He named each of them and in the evenings sat out in his rocker by the hutches, smoking his pipe. When Mrs. Barham finally insisted some of the rabbits be used for their intended purpose, five were butchered and served for dinner. No one could eat a bite. Nell relates that the rabbits were given a "decent burial" and no others were ever again on the menu.

Nell loved bears, and especially her long-time pet bear, Brownie. Although he was not allowed in the Glendale house, he had "house-privileges" in later residences. 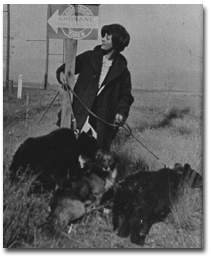 Shipman wrote about her filmmaking experiences and Brownie in a 1931 Good Housekeeping article entitled, "This Little Bear Went Hollywood." She mentions her pair of pet cubs attracting much attention in Glendale: "They had been like Siamese [twins]--eating, sleeping, playing and fighting together. Strung on a double leash and attended by my Scotch collie, the woolly pair romped through my home-town streets, calling a holiday for every schoolchild within sight. Glendale teachers took to bringing entire classrooms to the house to view the cubs."

In 1922 when Shipman built her own film studio in northern Idaho, she included a zoo of over 70 trained animals to use as actors in her wilderness movies. At this time the movie industry treated animals cruelly, but Shipman did not allow her trainers to use cattle prods, trip wires, drugs, whips or guns. Her rapport with animals lead to legendary stories about her ability to get wild and sometimes vicious animals to perform perfectly for her.