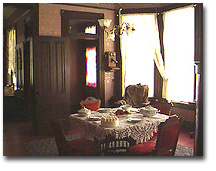 Mrs. Barham presided at the head of her formal and faultlessly set dining table. According to Barry, little boys who reached for food got their hands rapped with a spoon, and anyone caught slurping soup was sent to the kitchen to eat.

A family member missing at the table for a long period of time was Maurice, Nell's English-born older brother, who served in WWI. On the morning of the armistice (November 1918), he was gassed and had to convalesce in a French hospital until the summer of 1919. Nell gives a moving account in The Silent Screen of picking her brother up at Union Station and returning home. She tells him for the first time about the deaths of their parents and recounts the memories of them that the house holds. 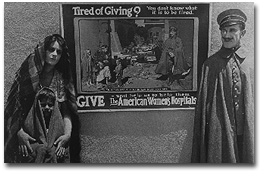 Everyone in the family did his or her part for the war effort. Mrs. Barham knitted socks, Mr. Barham planted a vegetable garden between the orange trees on the back property, Nell adopted a platoon of infantrymen and treated them to a dinner, show, and dates with starlets. At what is now Pershing Square, she was among the movie stars who sold kisses to those who purchased $1000 war bonds.

World War I appeal, featuring Nell and Barry Shipman as the refugees, and Nell's Vitagraph co-star Otto Lederer as the sinister officer.