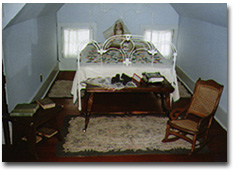 This upstairs bedroom was once the room of one of the doctors' children, Dot Hunt. Ten years later, it belonged to Barry Shipman (age 5 to 7). The room is large, although the photo shows only the alcove with a white wrought-iron bed in it. After Barry's grandmother passed away, he attended a military boarding school in Santa Monica.

As a young actor in one of his mother's pictures, Barry learned what she meant by, "The Picture! Anything for the Picture!" In one scene he and Nell were dog sledding across a frozen lake and they fell through the ice. Barry kept trying to scramble out of the freezing water, but the cameras were rolling, so Nell held onto his jacket to prolong the struggle and create a more dramatic scene.

Mr. Barham and Barry on the curb in front of the house (note Barry's uniform).

Undaunted by the experience in the icy lake, Barry tried out acting as a young man, but soon turned to his first love, writing. He eventually scripted hundreds of B Western movies and popular TV shows. In the '30s and '40s countless children thrilled to his Saturday afternoon serials, including Hawk of the Wilderness, Dick Tracy, Flash Gordon, Long Ranger and Zorro adventures. His television credits include episodes of "Kit Carson," "Lassie," and "Death Valley Days."

Barry and his wife, Beulah McDonald, a former Paramount actress, had twin sons and one daughter. Their daughter, Nina Shipman, carried on the family Hollywood tradition as an actress in numerous TV shows, such as "Rawhide," "Bonanza," and "Maverick."