The City of Glendale Released a Request for Proposals to Provide Commercial and Multi-Family Solid Waste Collection Services within the City of Glendale in August of 2019.  Responses were due by October 23, 2019 and are currently in being reviewed.

The scope of work for this tentatively divides the service area for the City into the following four zones. The zones include both business and multi-family sectors. Proposers may propose in one or more zones.  In its sole discretion, the City reserves the right to award one or more franchise agreements to provide collection services for business and multi-family accounts, or any combination of account/properties thereof, and to adjust the zone boundaries.  Furthermore, the City reserves the right to award only one zone per proposer and/or per proposer’s affiliated companies. 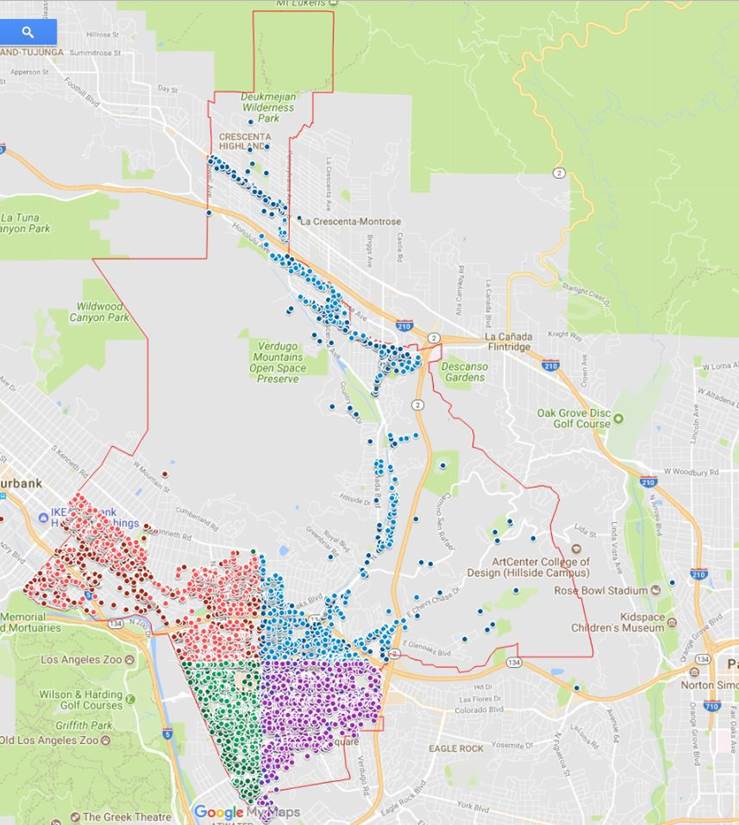 For information check out the Frequently Asked Questions page.

The City of Glendale currently has 37 permitted haulers that individually report on State mandates and pay Assembly Bill 939 fees.  Single-Family or properties with two to four units are exclusively serviced by the City. All permitted haulers (including the City) compete for all other accounts.  With the help of a consultant the City is determining the best commercial and multi-family service. The following collection alternatives will be considered by the City Council for the future management of the City’s commercial and multi-family solid waste.

Based upon the City’s data, there are 23,554 single-family, 4,298 multi-family and 1,229 businesses serviced by the City.  Multi-family units can be broken up into the following categories:  2-4 units which are comprised of approximately 1,691 properties and 5 units or more.

The City of Glendale received $2 million from 39 haulers for 2016 for Assembly Bill 939 fees.  This fee was generated by charging haulers 20% of their gross revenue annually for hauling within the City.  With a hauling system that reduced the number of haulers, the City would need to determine how this revenue would be generated.

The City has developed an online survey for this for this process, and we greatly value community input.  Click here to provide your input.

Contact info for the Solid Waste Haulers who attended the Update meeting on August 24, 2017.

In 2013, the City sent out a 5 year franchise letter to all permitted haulers. A copy of the letter can be found here.