The City of Glendale has a noteworthy natural history that provides residents with a unique plant and animal ecosystem both surrounding and intermixed within an urban environment. Open land areas around the city still consist of woodlands, chaparral and grasslands inhabited by indigenous trees and shrubs. The City’s Public Works Department in collaboration with the Parks Department recently completed a large scale reforestation effort for the hillsides along Scholl Canyon Park.

Over the past few years, long term drought conditions and an infestation of aggressive tree pests killed a significant majority of the mature pine and eucalyptus trees that had graced the slopes at the entrance to Scholl Canyon Park along East Glenoaks Drive. Public Works recognized an opportunity to return the area to an indigenous grove of trees and shrubs using funds specifically allocated for that purpose from its Indigenous Tree Program. It was the objective of the Department to provide a representation of native trees protected by the City’s Indigenous Tree Ordinance. The canyon environment at Scholl Canyon Park presented a perfect opportunity for fulfilling this objective at a location that aims to visually educate visitors on the aesthetic and environmental appeal of native species which thrive in our community’s ecosystem.

The City Parks Department supported this reforestation effort by tapping into existing recycled water resources along Glenoaks Drive and establishing a slope side irrigation system. Recycled water now serves as the primary source for sustaining the new landscaping. Mulch was applied to the entire hillside to provide protection for the newly planted trees and shrubs, as well as condition for the soil and suppression of weeds.

The Scholl Canyon Reforestation Project was completed at the end of April.

Hillside after tree removals and grubbing of hillside area

Completed project with trees and shrubs installed and mulch applied 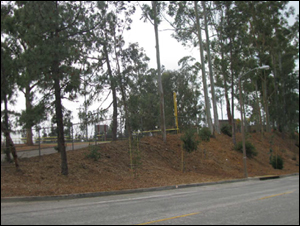