The City of Glendale and the Glendale Police Department (GPD) have received many inquiries about our police department’s policies and how they may or may not meet some of the guidelines being advocated for by police reform organizations.  We have re-examined our polices and feel that most, if not all, directly align with what is being asked for in the recommendations.

The Glendale Police Department has and continues to work very hard to build relationships between those we serve, law enforcement, and community leaders, yet we recognize that maintaining this trust is an ongoing effort.  That is why Glendale regularly trains its police officers in responding to hate crimes, tactical communications, cultural diversity, and racial profiling, with the practice of de-escalation representing a critical component of the department’s arrest control and defensive tactics training for the last two decades.

GPD prides itself on being a very professional police department. One that provides the full range of law enforcement services, while doing so with compassion. The men and women of the Glendale Police Department believe in constitutional policing –here to protect everybody’s constitutional rights, and to do so with respect and dignity. Communities change and adapt, and the Department spends a lot of time creating, maintaining, and enhancing relationships with community members. That job is never done.

The bar arm restraint or trachea choke, where pressure is applied to the front of the person's throat, shall not be utilized unless a life-threatening situation exists and no other reasonable options exist.

We expect officers to use conflict resolution and de-escalation techniques to stabilize an incident.  When feasible and in all situations that will not compromise the safety of the public or officers involved, officers should seek to minimize the likelihood of the need to use force during an incident and increase the likelihood of voluntary compliance.  Officers shall attempt to slow down or stabilize the situation so that more time, options and resources are available for a safe and peaceful incident resolution.

De-escalation through verbal communication may include:

Speaking in a calm and clear tone

Officers identifying themselves and their department

Allow time for subjects to understand and respond

Provide options to the subject, when available

Officers should also consider whether any lack of compliance is a deliberate attempt to resist or an inability to comply due to a medical / mental conditions, physical limitation, language barrier, fear or anxiety.

Where feasible, the officer shall, prior to the use of force, make reasonable efforts to identify themselves as a peace officer and to warn that deadly force may be used, unless the officer has objectively reasonable grounds to believe the person is aware of those facts.

EXHAUST ALL OTHER MEANS BEFORE SHOOTING:

Our policy requires officers evaluate the use of other reasonably available resources and techniques when determining whether to use deadly force.

While the Department recognizes that employees are frequently called upon to make quick decisions under less than ideal circumstances, this does not lessen the accountability of the employee for their actions. It should always be remembered that an employee's actions are subject to review, both internally and judicially.

Should a Glendale Police Department employee witness force, by a member of this or another police agency, where the force is clearly beyond that which is objectively reasonable under the circumstances, when in a position to do so, the employee shall intercede to prevent the use of unreasonable force.  The employee is also required to report the incident to a Glendale Police supervisor as soon as circumstances permit.

SHOOTING AT OR FROM MOVING VEHICLES:

While our policy does not ban shooting at moving vehicles, it is close to Campaign Zero’s report, which provides a similar exception.  Shots fired at or from a moving vehicle are rarely effective and are generally discouraged. Officers should move out of the path of an approaching vehicle instead of discharging their firearm at the vehicle or any of its occupants. An officer should only discharge a firearm at a moving vehicle or its occupants when the officer reasonably believes that other reasonable means are not immediately available to avert the threat, or if deadly force other than the vehicle is directed at the officer or others.

USE OF FORCE CONTINUUM:

Law enforcement agencies vary whether they incorporate a use-of-force continuum.  Continuum’s do not require that officers start with one level of force before moving to another.  Our policies require that officers shall use only that amount of force that reasonably appears necessary given the facts and totality of the circumstances known to or perceived by the officer at the time of the event to accomplish a legitimate law enforcement purpose (Policy 300.3). Officers may use objectively reasonable force to: 1. effectuate an arrest; 2. prevent escape or 3. to overcome resistance (PC 835a(b)).

Verbal commands can be used for cooperative individuals.

Physical techniques (control holds) can be used to control a physically or actively resisting individual (Policy 300.3.3).

Non-Deadly intermediate force options/tools (such as: Taser & Baton) can be used to control an individual who is violent/combative or who has demonstrated the intent to be violent (Policy 305.5).

Any use of force by a member of this department shall be documented promptly, completely and accurately. The officer should articulate the factors perceived and why he/she believed the use of force was reasonable under the circumstances. To collect data for purposes of training, resource allocation, analysis and related purposes, the Department may require the completion of additional report forms, as specified in department policy, procedure or law. Notifications must be made to Supervisors and to the California Department of Justice. In addition, prior to booking or release, medical assistance must be obtained for anyone who exhibits signs pf physical distress, who has sustained injury, expresses a complaint of injury or pain, or who was rendered unconscious.

We are committed to the continued betterment of our department. We will continue to improve our organization, relationship with our community, and the manner in which we provide police services. 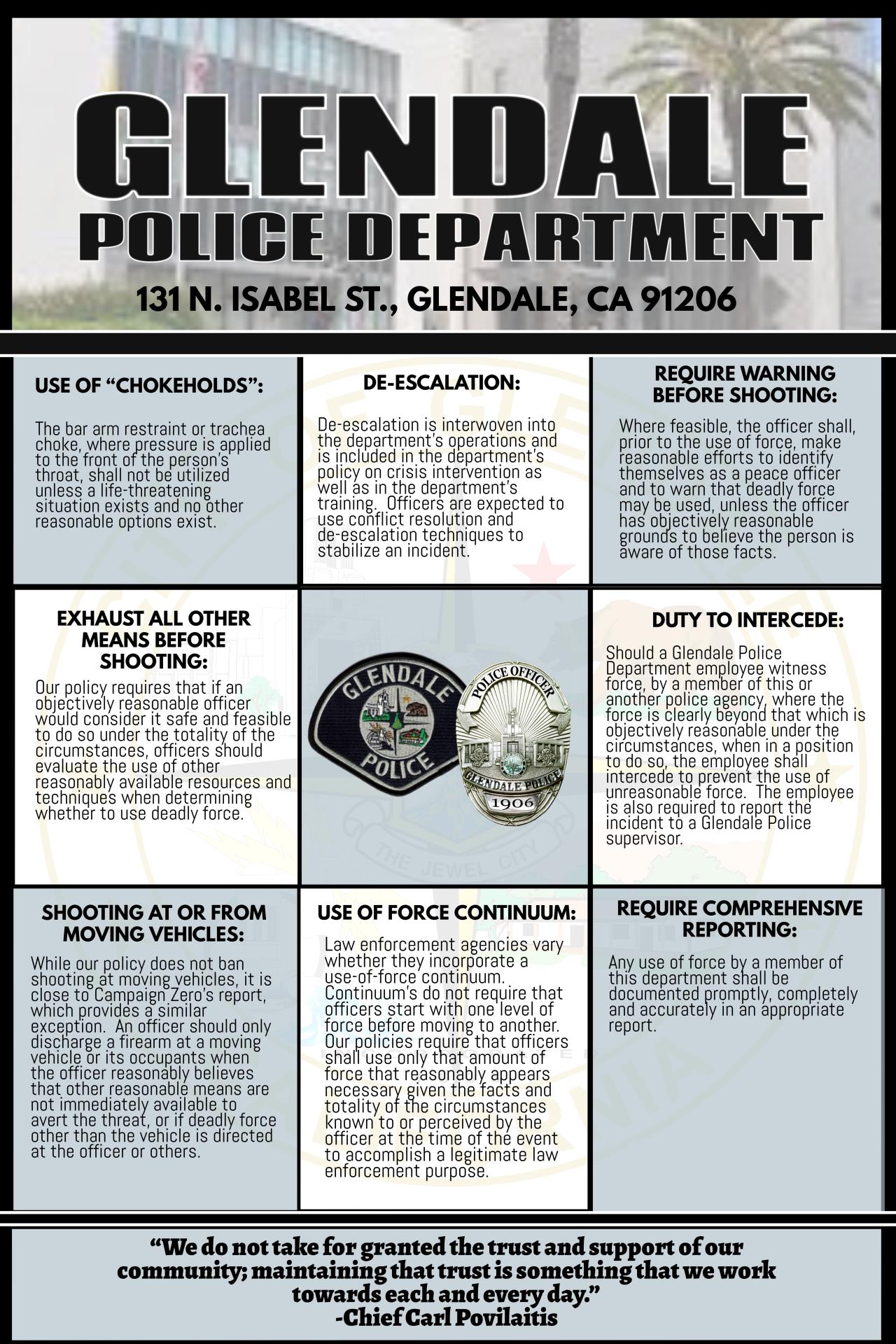