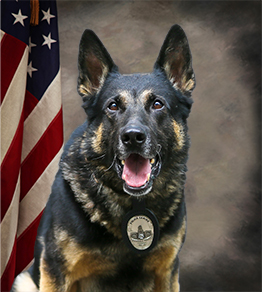 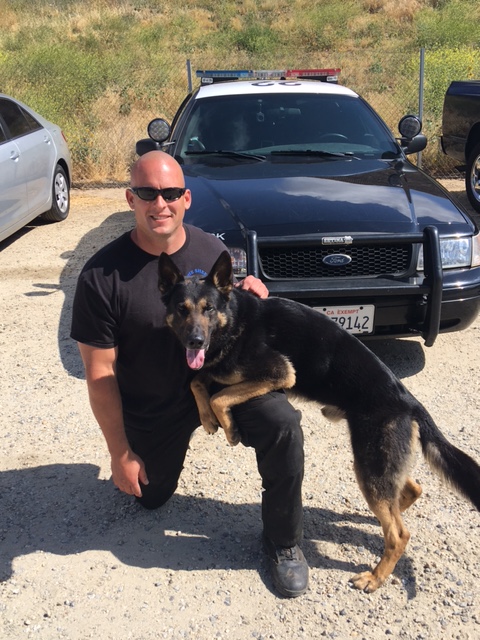 Officer Kyle Heinbechner and K9 Idol have been partners since February 2017.  Idol is a German Shepherd and was born on March 10, 2011 in Germany.  Idol’s commands are in German.  Kyle and Idol attended a 5-week basic K9 academy at Adlerhorst International in Riverside, California. They successfully passed the California P.O.S.T. requirements and are assigned to patrol. K9 Idol is cross-trained in firearms and explosive detection. 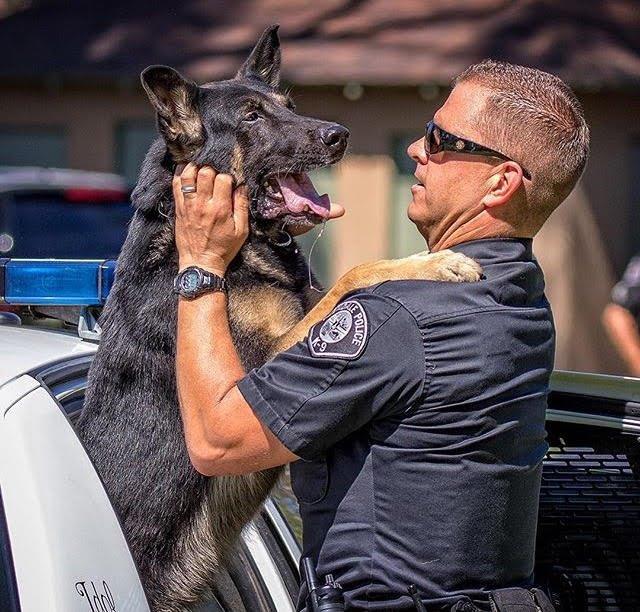 Idol's thank you notes from students and staff at Mark Keppel following a demo. 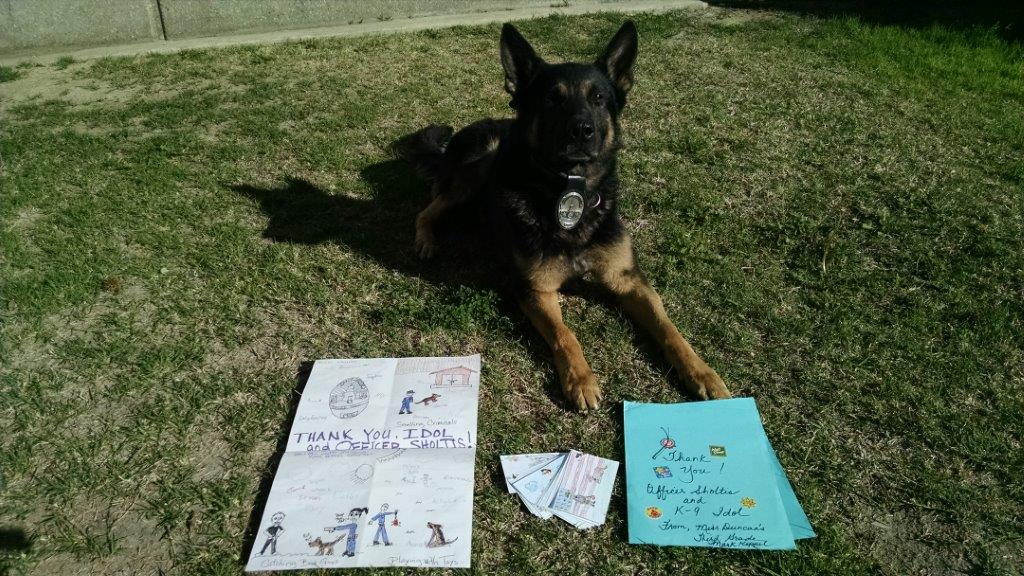 Idol enjoying some quiet time on his favorite patch of grass. 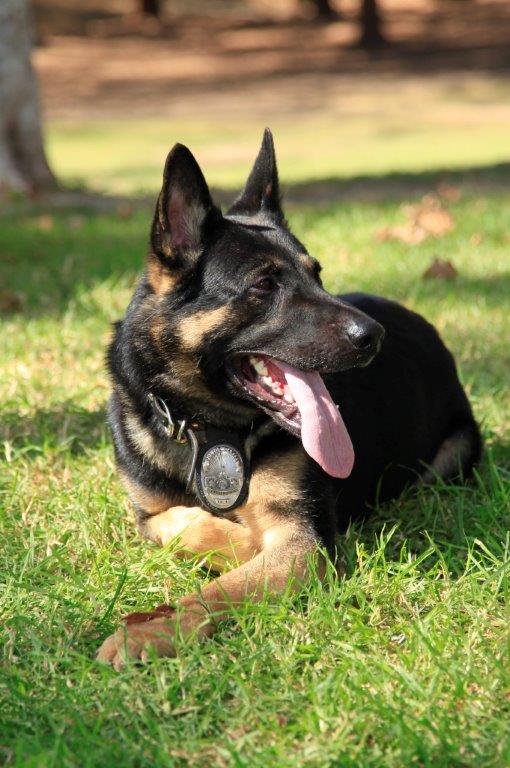 Idol and Sgt. Sholtis on the Toll Middle School field during President Obama's visit to Glendale. 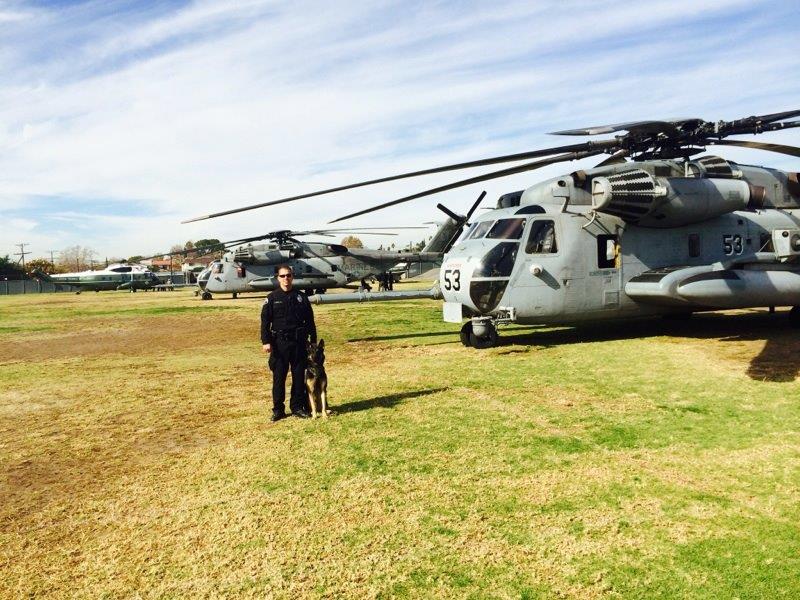 Glendale police officers were involved in a high-speed vehicle pursuit through Glendale, which terminated near Harvey Drive and the 134 Freeway.  The suspects exited the vehicle and fled from officers, but were quickly apprehended.   K-9 Idol was used to retrace the steps of the suspects as they ran from the police, looking for any evidence that was discarded during the foot pursuit.  Amidst all the accumulated litter along the roadway, Idol keyed in on one crushed soda can.  To any officer, this can would look like any other discarded can.  However Idol detected the scent of fresh human odor on this single piece of trash.  Idol alerted his handler, Officer Sholtis, to the item.  Upon further inspection, the can contained a small amount of heroin.  Often times, heroin users will use the bottom of a soda can to heat the drug, which is then injected into their system.  Thanks to Idol’s incredible sense of smell and ability to search for discarded evidence, the suspect was charged with an additional felony and discarded drugs were safely taken off the street.

A Glendale police officer contacted two people, one of whom was in possession of ammunition.  Although suspicious, it was not illegal for this person to possess the ammunition.  However, there was a vehicle associated with the subjects in the immediate area.  Concerned that the subjects may be in possession of a concealed firearm in the car, officers were given consent to search the vehicle for a gun.  K-9 Idol, who is cross-trained to detect explosives and firearms, was used to search the vehicle.  Although the vehicle was completely filled with clutter, Idol alerted to the trunk area.  Officers hand-searched the corner of the trunk where Idol alerted and recovered two small .22 caliber bullets underneath the spare tire.  The significance of this find was that the vehicle belonged to the other subject stopped, who was a convicted felon.  Thanks to Idol’s keen sense of smell, officers were able to locate the bullets and arrest the convicted felon for being in possession of ammunition.    Without Idol, it would have been nearly impossible to locate the small caliber bullets in such a cluttered vehicle.

Officers were involved in a high-speed chase during the early morning hours.  The suspect, wanted for felony evading, endangered the lives of many people because of the reckless nature of his driving while trying to escape from the police.  The suspect ultimately ran from the vehicle in the area of Lexington and Adams and hid in the neighborhood.  It was critical that the male be found, since he now posed a serious risk to the safety of the residents in the neighborhood.  K-9 Idol and K-9 Branko responded to the scene and used their sense of smell to search for the suspect.  While systematically searching the neighborhood, K-9 Idol smelled the suspect on the other side of a fence.  The suspect abandoned his hiding spot in someone’s backyard and hopped several fences to try to get away from pursuing officers.  K-9 Idol paralleled the path of the suspect and was able to cut him off.  The suspect attempted to hide behind a garage, but K-9 Idol located him and assisted officers with taking him into custody.

An elderly man with Alzheimer’s disease walked away from his residence at a senior living facility in the area of Isabel and Harvard. The male’s wife woke up from a nap to find her husband missing. The police responded to the facility and with the aid of security cameras, the officers were able to determine exactly which door and at what time the male left. Already four hours after the male left, the chance of tracking his scent was quickly diminishing. Factors such as ultra violet sun rays, wind, and passing vehicle traffic can reduce and/or scatter the scent left behind by the lost male. With the sun setting and the onset of darkness quickly approaching, it was crucial to find the male before his safety was further jeopardized.

Officer Sholtis with his K-9 partner, Idol, arrived at the scene. Personal items were collected from the male’s room, which contained his scent. The scent articles were presented to Idol near the door where the male was last seen exiting the building. Even though Idol just recently graduated from his three-week Hard Surface Tracking class, he worked the scent like a seasoned professional. With his nose to the ground, Idol followed the little bit of scent that was still present. Idol tracked the male for four-tenths of a mile, through alleys, down sidewalks, even crossing major intersections. Sniffing 7-8 times each second, tracking is physically demanding for dogs, especially young ones like Idol. Even though his nose was still working, Idol was exhausted and unable to continue the track. However, based on the direction that Idol led Officer Sholtis, critical information about the male’s most probable direction of travel was communicated with other patrol officers in the area. Within ten minutes of continued searching, an officer located the lost male just four blocks away, along the same sidewalk and in the same direction that Idol was tracking towards. The male was safely returned to his residence, much to the delight of his family.

A vehicle burglary suspect was being detained by patrol officers in the area of Rosedale and Glenoaks. The suspect had been seen in several different yards and garages and police had been searching for him for several hours. When the male was eventually caught, he was wearing different clothing from what he was described as wearing by a witness two blocks away. This led officers to believe that the suspect, thinking he was about to be captured, purposely changed his clothing in order to avoid being recognized. Although one witness positively identified the suspect even though he was wearing different clothing, officers knew that finding the male’s hidden clothing would help their case against the suspect in court. Furthermore, finding the hidden clothing may also lead officers in recovering additional evidence, such as stolen items, that he abandoned along the way.

Officer Sholtis and his K-9 partner, Idol, responded to the location where a witness observed the suspect in a neighbor’s driveway before running off. Even though it had been over an hour since the suspect ran from the driveway, K-9 Idol was still able to pick up on his “fear” scent. Idol tracked the suspect’s path across the street, down a sidewalk, through a large parking lot, through an open gate, and into a backyard of a duplex property. Idol pulled towards a secluded area of the yard which was surrounded by overgrown bushes. Idol came across a black cell phone, where he laid down with the item between his front paws, which is his alert to finding an article containing fresh human odor. Next to the cell phone were a black hat, a black visor, and a khaki pair of pants. The clothing that Idol located matched the prior descriptions of what the suspect was wearing on earlier burglary attempts. It was obvious that the items were stashed by the suspect in this secluded area in order to change his appearance and avoid capture. The cell phone may have either been a stolen item or the suspect’s personal cell phone that may have contained information that would incriminate him if located by police.

Without finding these key pieces of evidence, the case against this burglary suspect may not have been as strong. Locating the clothing that he was seen wearing at the scene of several burglaries further tied the suspect to those crimes. This was a job well done by Glendale’s newest K-9 rookie, Idol.