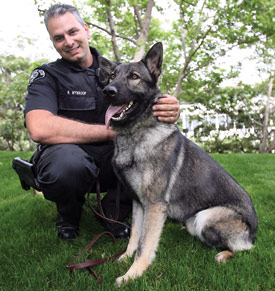 After 5 and a half years of dedicated service to Glendale and the surrounding areas, Marlin has retired from the Glendale K-9 unit. K-9 Marlin, who joined the force in March 2006, was cross-trained for suspect searches and narcotic detection. Together with his handler, Officer Robert Wynkoop, Marlin located many violent and dangerous suspects who ran and hid from police, including a known narcotics dealer, a gang member with a felony warrant, and a suspect who led police on a high-speed pursuit that ended with a collision. The suspect fled the location on foot, but was tracked down hours later by Marlin at a nearby apartment complex, where he was taken into custody. Marlin had numerous drug finds, one of which produced several kilos of cocaine hidden in a dashboard of a vehicle. During a "Man with a Gun" investigation, Marlin used his nose to search the area adjacent to where the suspect was taken into custody. Marlin alerted his handler to a gun that was stashed under a large bush by the suspect just prior to police arrival. Imagine if the gun was never found by police and ended up in the hands of a curious child. Marlin also took part in the apprehension of a suspect who was involved in a large-scale marijuana grow in the local Verdugo Mountains in 2008.

When Marlin was not chasing down suspects, he was performing demonstrations for kids and adults in the Glendale area. He competed in four police K-9 competitions in Southern California, winning the coveted "Trial Champion" one year and the next-best "Top Patrol Dog" award the following year.

Thank you Marlin for your dedicated service and good luck with your well-deserved retirement!