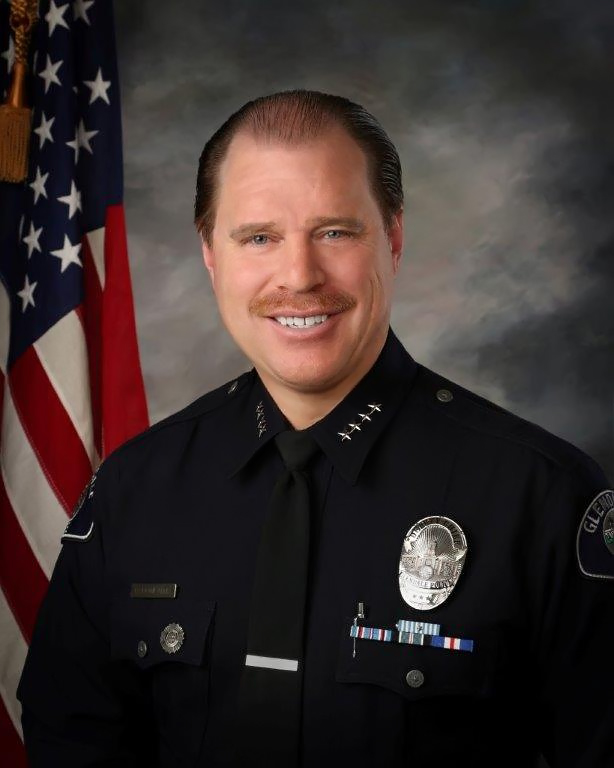 Chief Carl Povilaitis was appointed to Police Chief on May 1, 2018. Carl has been serving the Glendale community for the past 27 years. He began his career in law enforcement with the Glendale Police Department in 1990 after graduating from the Los Angeles Sheriff’s Academy class 267 in February of 1991.

After Graduating from the academy, Carl was assigned to the Field Services Division where he worked in Patrol. He eventually transferred to the Investigative Services Division and completed a tour in the COPPS Unit focusing on community policing and problem solving. He was promoted to Sergeant in 2001. In 2002, he transferred to the Support Services Division where he supervised the Glendale Police Department's Air Support Unit until he promoted to Lieutenant. He served as the Traffic Bureau Commander where he was responsible for traffic enforcement, parking enforcement, and major/special event planning for the City.

In 2009, he assumed the duties as the Special Operations Division Commander to begin the process of developing the DNA lab and the Information Lead Enforcement and Accountability Data Project. Carl was promoted to Captain in 2010 and has overseen all major divisions of the Police Department. In 2013, Carl was promoted to the rank of Deputy Chief of Police.

Carl obtained an Associate's Degree in Administration of Justice from Monterey Peninsula College, a Bachelor's of Science in Criminology with an emphasis in Law Enforcement from Fresno State, and a Master's Degree in Public Administration from the University of Southern California. He is also a graduate of the California Commission on Peace Officer Standards and Training Command College Class 45.

Carl participates and volunteers for a number of clubs and non-profit organization boards within the community. He serves as Board Member for the Glendale Educational Foundation, the community board of Glendale Memorial Hospital, and is an Associate Board Member of the Glendale Chamber of Commerce. He served as a Commissioner representing the City of Glendale on the Burbank-Glendale-Pasadena Airport Authority from 1999-2009. He has also serves as an Adjunct Faculty Member at Glendale Community College. 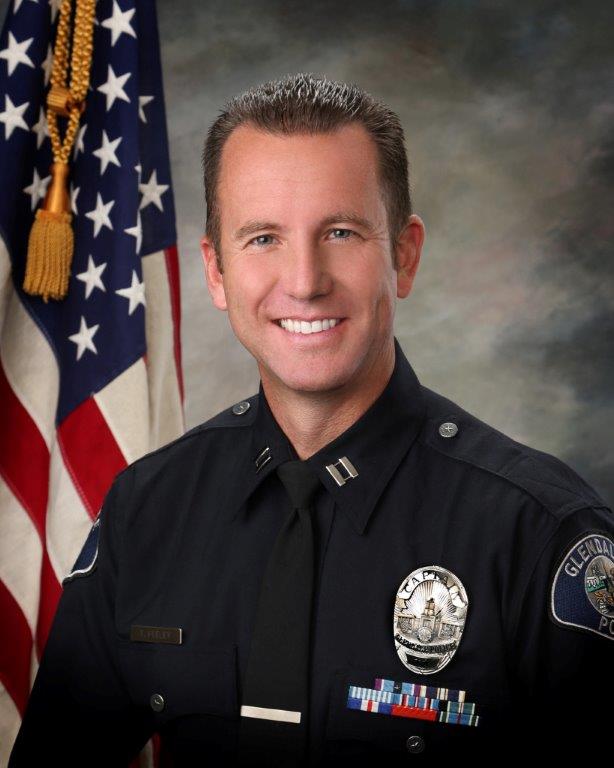 Tim Feeley was born and raised in the City of Glendale. He graduated from Loyola High School in 1989 and then went on to Loyola Marymount University where he earned his Bachelor of Arts Degree with a Major in Philosophy and a Minor in English.

In 1995, Tim joined the Glendale Police Department and was assigned to Patrol before being transferred to the Detective Bureau/Assaults Detail. He was assigned to the Assaults Detail for three years, two of which he was a training officer. He then transferred to the Vice/Narcotics Unit where he worked for four years, three of which as a training officer. While in Narcotics, Tim taught classes to the community as well as to officers throughout the country.

Tim is an original member of the Glendale Police Department SWAT team that was established in 1997. He has worked as an Operator, Team Leader and Lieutenant for both the tactical side of the team as well as the crisis negotiations side.

He is an avid runner and he has been part of the Glendale Police Department Baker to Vegas running team. He was team captain for over 10 years, and he has run in the event for the past 23 years. Tim was promoted to Lieutenant in 2011 and has managed the Special Investigations Bureau, the Patrol Bureau and the Detective Bureau. As the SIB Lieutenant, he had the opportunity to travel to Armenia to strengthen relations with our law enforcement partners.

In 2014, he became the first manager in our agency to receive the “Officer of the Year” award. He was recognized for his commitment to our agency, his volunteerism throughout the community as well as his mentorship within the department.

Despite all of Tim's accomplishments, he is usually recognized as “the guy married to the K-9 handler.” His wife, Officer Maribel Feeley, joined the Glendale Police Departments K-9 Team in 2005 and was partnered with K-9 Yudy. After Yudy's retirement in 2014, K-9 Jager joined the team and became Ofc. Feeley's new partner. This means that in Tim's spare time, he can usually be found in a bite suit training with the dogs.

Andrew was born in San Gabriel, California and raised in Alhambra.

Andrew began his law enforcement career with the Los Angeles County Sheriff’s Department as a Reserve Deputy Sheriff. He later became a full-time Deputy Sheriff and was assigned to the North County Correctional Facility.

In 2002, Andrew was hired by the Glendale Police Department and was assigned to Patrol. His dedication to duty and hard work allowed him the opportunity to transfer to the Detective Bureau where he worked the Assaults Detail and Robbery/Homicide Unit.

Andrew has been an operator on the Department’s SWAT team and is a long time member of the Baker to Vegas running team.

In 2012, Andrew promoted to the rank of sergeant and returned to patrol. In 2015, he was assigned to the Internal Affairs Unit. As a collateral duty, he was a team leader on the Crisis Negotiations Team.

In 2016, Andrew promoted to the rank of Lieutenant. He worked assignments in the Patrol Bureau, the Specialized Services Bureau, and the Professional Standards Bureau. He also served as a SWAT Lieutenant.

Andrew is a devoted husband, father, and long-time Glendale resident. In his spare time, he enjoys the outdoors and spending time with his wife and family.

Captain Robert William was born in Iran and raised in Armenia. As a child, he and his family immigrated to the United States and settled in Glendale, CA where he attended John Muir Elementary School, Roosevelt Middle School and graduated from Glendale High School.

In 2002, Robert joined the Glendale Police Department as a police cadet and later graduated the Rio Hondo Police Academy in 2003. Robert worked in assignments in Patrol, Special Enforcement Detail, detective in the Burglary and Auto Theft unit and was a member of the SWAT team.

In 2012, he was promoted to the rank of Police Sergeant and supervised patrol teams, the Crisis Negotiation Team and the K9 Unit. He also served as the Adjutant to the Chief of Police and was the Public Information Officer. The experience of being the Adjutant to the Chief of Police gave Robert an opportunity to work in the organization from an executive perspective. In this capacity, he built strong relationships with labor associations, community leaders and other city departments. He also worked closely with elected officials, business and religious leaders and represented the Glendale Police Department in organizations, media and public events locally, nationally and overseas.

In 2017, Robert was promoted to the rank of Police Lieutenant and served as a patrol watch commander and later as the commander of the Special Investigations Bureau. He managed the department’s Vice/Narcotics unit and the Eurasian Organized Crime Taskforce. In this capacity, he developed valuable relationships with federal partners and began developing a strategic initiative in combating the national opioid epidemic and minimizing its impact on Glendale’s youth through parent/teen education and outreach.

In March of 2020, Robert was promoted to the rank of Police Captain and became the first Armenian American officer to join the ranks of the department’s command staff.

Robert serves as a member of the Glendale Adventist Medical Center Advisory Committee as well as the Glendale Management Association board. He is a graduate of the Sherman Block Supervisory Leadership Institute and possesses a Bachelor’s Degree in Criminal Justice Management and Master’s in Public Administration from California State University, Northridge.

Throughout his career, Robert has stayed active within the organization and community. He has participated as a runner for the Glendale Police Department Baker to Vegas running team and cycled the annual Police Unity Tour. He has been the recipient of several accolades including the Divisional Commendation Award, Distinguished Service Award, Medal of Heroism and the Purple Heart. 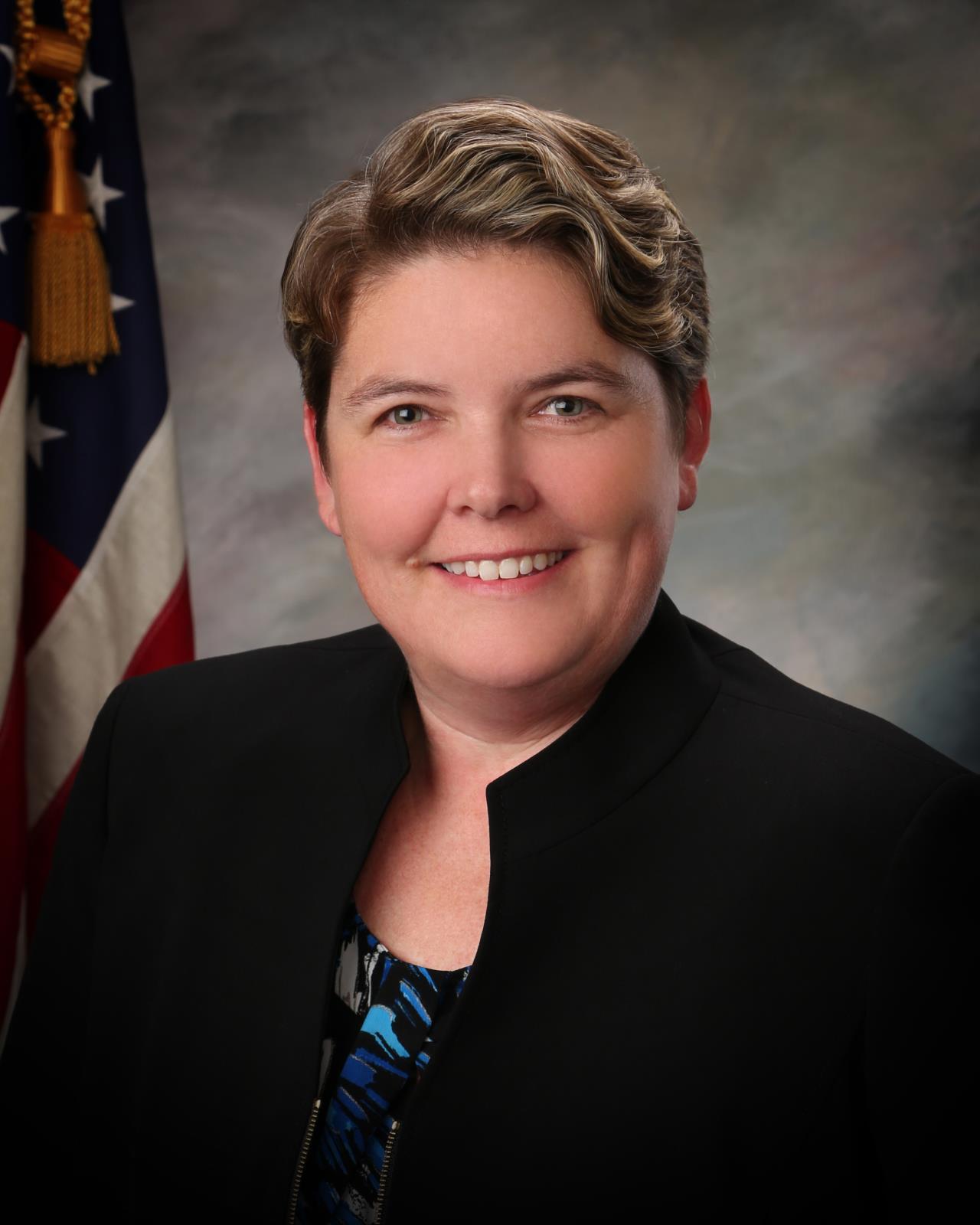 Sheryl was born in Burbank, California, and raised in Glendale.

In 1997, Sheryl began her career in law enforcement in Kansas at the local police department as a police, fire and emergency medical services trained dispatcher. The agency handled police services including 911 for the city, as well as fire and emergency medical services for the entire county, which is the largest in the state. Sheryl quickly worked her way through training and was soon a certified dispatch trainer. Records functions such as National Crime Information Center (NCIC) entries, notifications and crime bulletins were handled by the dispatch center. Sheryl was designated as the National Crime Information Center (NCIC) and Kansas Bureau of Investigations (KBI) auditor for her agency and was tasked with ensuring accuracy and compliance was maintained.

In 2006, Sheryl moved back to California to be closer to her parents and siblings.

In 2007, Sheryl began her career at the Glendale Police Department as a police communications operator. In 2008, she was appointed as acting trainer for the bureau’s senior program and remained a training officer for three years. In 2010, Sheryl was promoted to Communications Shift Supervisor. As a communications shift supervisor, she was responsible for the day to day supervision of a dispatch team and in charge of the bureaus training program. In 2014, Sheryl was promoted to the position of communications and technology administrator. As the bureau manager, Sheryl was responsible for the oversight and operation of the communications and technology bureaus. As the Primary Safety Answering Point (PSAPS) manager, Sheryl was actively involved with the Los Angeles County area PSAPS. She worked on numerous 9-1-1 and technology related improvements for our department, including next-gen Regional Integrated Next Generation 9-1-1, Emergency Services IP network, text to 9-1-1 and countless software and hardware upgrades.

In 2016, Sheryl began her involvement with the Interagency Communications Interoperability (ICI) system by participating in the operations committee meetings. In 2017, Sheryl was appointed as Glendale’s representative of the ICI System Governance Board. Shortly after her appointment, Sheryl was elected and currently holds the position of vice chair on the ICI System governance board. She is also Glendale’s representative and the chair of the ICI System operations committee. Most recently, Sheryl joined the California Governor’s Office of Emergency Services NG9-1-1 task force as a Los Angeles County Agency representative. Sheryl has also been recognized by our organization for her many accomplishments during her time with the City of Glendale.

Most important to Sheryl is her family. She has been married to her husband Danny for over 20 years and they have 2 sons, Alex and Nate.