The Census Bureau has begun releasing 2010 Census Data. Limited data about Glendale has been released, such as total population, population by racial category, total Hispanic and Latino population, and data about housing tenure and households. As the Community Development Department reviews and analyzes the data, we will post it on these pages.

If you would like to access Census data, including data from 2010 and earlier, please visit the new American FactFinder page produced by the U.S. Census Bureau. The full release schedule for the 2010 Census data is available from the Bureau.

The City has created several web pages to publish data from the 2000 Census:

Household information -- lists the median age and size of households.
Income and Poverty -- provides economic characteristics.
Racial and Ethnic Characteristics -- provides information about the various ethnic groups in Glendale, including the Armenian and Hispanic populations.
The Future of Glendale -- shows the projected future population.

The City has compiled selected 2000 Census data into an Excel spreadsheet that can be downloaded.

The following data was obtained from the U.S. Bureau of Census and from the Department of Finance unless otherwise cited. Additional analysis of the Census, related socioeconomic information, and detailed residential development activity may be found in other Community Development Department reports and publications.

Reversing a long trend, the population in the City of Glendale fell to 191,719 in 2010. This was a decrease of 3,254 people from the total of 194,973 found in the 2000 Census. It is unclear why the population fell, though it is likely related to the poor economic conditions felt throughout the country in the last part of the previous decade. 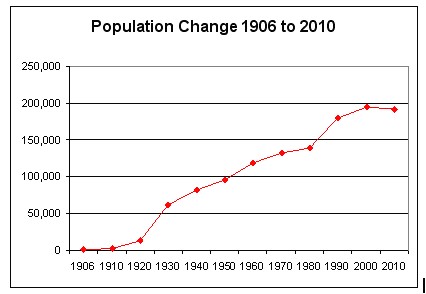 The California Department of Finance also provides annual population estimates. Following are the most recent estimates:

GLENDALE COMPARED TO OTHER AREAS

Between 1980 and 2000, Glendale grew significantly more than neighboring areas.

Glendale grew at about the same rate in the 1990's as the County: 8.3% vs. 7.4%. Newer cities in the County grew at much higher rates. Santa Clarita grew by 36.2% and Palmdale by 69.5%. Growth in all nearby areas slowed dramatically over the last decade. 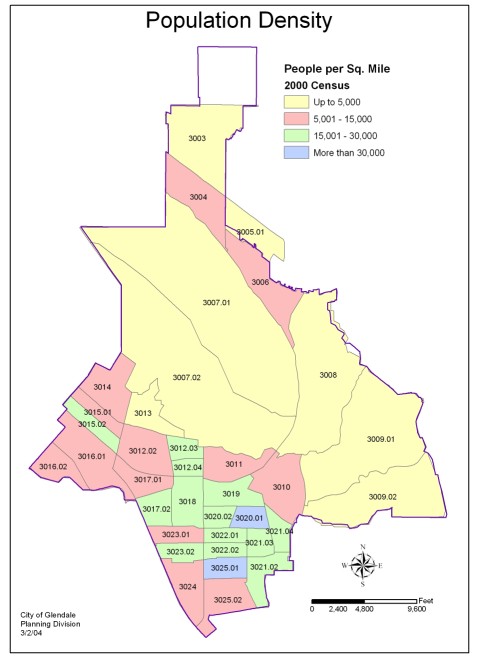