GWP has a long history of supporting renewable energy. In 1937, Glendale became one of the first California cities to contract with the Federal Government to purchase hydropower from Hoover Dam, and we've been generating electricity using landfill gas from Scholl Canyon since 1994. More recently, GWP has made long term investments in wind, small hydroelectric, and geothermal generation resources. In addition, we built a 261 KW solar photovoltaic generating system on top of the parking garage at the local community college.

To show our continued commitment to renewable resource development, GWP adopted a Renewable Portfolio Standard (RPS) in 2004, which is being updated to comply with recent changes in California law. The GWP RPS recognizes the intent of the Californian Legislature to encourage renewable resources, while taking into consideration the effect on rates, reliability, financial resources, and the goal of environmental improvement. The current GWP RPS sets an initial goal of 20% of its annual energy requirements from renewable energy sources through 2015, with a step-up to 25% in 2016 and another step-up to 33% in 2020.

Today, GWP proudly provides well over 20% of its energy requirements from renewable resources on an annual basis as follows: 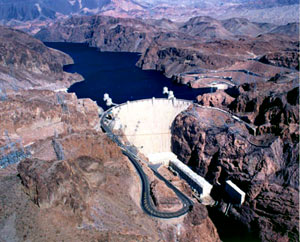 The GWP entitlement in the Hoover Dam Power Project totals 20 MW. This resource is formally purchased from Western, and consists of an up-rated portion of the plant of 2 MW and a renewal portion of 18 MW, with annual associated energy of approximately 2,000 MWh and 56,000 MWh, respectively. This contract remains in effect until October 1, 2017.

Tieton Hydropower Project (Tieton) was built in 2005-06 at the base of Tieton Dam, which was constructed during the period of 1917-25 for irrigation purposes. At times during the year, the water upstream of the dam is frozen and the plant generates no energy. The plant operates only when water is released through the dam for irrigation needs, which is anticipated to occur annually between the months of May through October. Glendale now owns 50% of this 20 MW facility, with an annual energy allotment of approximately 22,000 MWh.

GWP has signed a 25-year power purchase contract with Iberdrola, formerly known as PacifiCorp Power Marketing, Inc. (PPM) for the purchase of wind powered electrical energy associated with a 9 MW share of the 145.8 MW High Winds wind generation facility located in Solano County, California. The contract allows GWP to have power delivered at a flat 3 MW based on a 33% capacity factor. Therefore, this resource will provide about 26,000 MWh of renewable energy on an annual basis to GWP customers. This contract commenced on September 1, 2003.

GWP has signed a 25-year contract with SCPPA for the purchase of up to 3 MW of geothermal power. The project is located in the geothermal areas of Imperial Valley, California. This contract commenced in February 2006 at the level of 1 MW. An additional 2 MW was added in 2008. Currently, GWP receives approximately 17,500 MWh of renewable energy on an annual basis from this project.

GWP has signed a 16-year power purchase contract with Iberdrola. This 2nd wind power contract with Iberdrola will provide up to 10 MW of capacity at a 33% capacity factor from a generation facility located in Southwest Wyoming. The contract commenced in July , 2006, and currently provides approximately 25,000 MWh of renewable energy on an annual basis to GWP's customers.

GWP has signed an 18-year agreement with SCPPA for the purchase of 20 MW of wind powered generation located in Gilliam County, Oregon. Iberdrola has contracted with SCPPA to be the power supplier. GWP’s share of Pebble Springs is 20 MW with an expected capacity factor of 33%. The project will provide GWP with approximately 58,000 MWh of energy per year. The project commenced service on January 1, 2009.

GWP is committed to exploring new renewable energy options for its customers. GWP currently offers rebates for customers to install grid-connected photovoltaic power generation systems. These systems require an interconnection agreement that allows GWP to buy any excess power from the customer. To date, in cooperation with various residential and commercial customers, approximately 700 kW of grid-connected photovoltaic generation has been installed on various structures within the City including the Glendale Community College PV array on their parking structure.