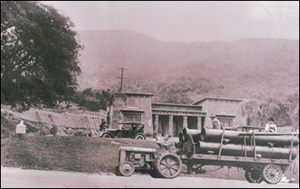 In late 2009, Glendale Water & Power (GWP) marked our centennial, having provided reliable, cost-effective service to our customers for 100 years and counting.

Here’s a brief look back at our first century of service, as we established the systems necessary to best meet our customers’ electric and water needs.

Glendale’s interest in municipal ownership of its own “light and power” system dates to early 1909, three years after the city incorporated. Glendale needed street lighting and the cost quoted by the existing electric service companies was considered excessive.

In June 1909, Glendale held a successful $60,000 bond issue election to acquire and construct an electric works system for the city. That November, it paid $23,000 for the privately owned Glendale Light and Power Company, located within corporate limits. The city spent the rest of the money to improve the distribution system and extend it to provide power to residences not previously served by the system. 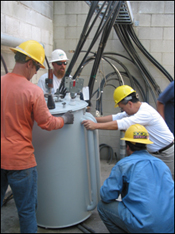 Until 1937, the city purchased all of its power from the Southern California Edison Company, the successor to the Pacific Light and Power Company that initially sold the young Glendale utility its electricity. That year, the city entered into contracts to meet growing demand by receiving power from Hoover Dam.

However, studies in 1938 showed that this additional power would not be enough after 1942, so the city established its own steam-electric generating plant. The first unit, with a capacity of 20,000 kilowatts, entered service in 1941.

Over the years, GWP added several units to its Grayson Power Plant, the latest a 50-megawatt unit added in 2003 that can provide enough electricity to serve 50,000 homes. More recently, Glendale has added renewable sources of electricity to help reduce our carbon footprint.

Looking ahead, GWP is committed to increasing our supply of renewable energy sources, with a goal by 2020 of providing 33% of our power from cost-effective, renewable resources.

When Glendale was incorporated in 1906, there were at least 14 private water companies operating in the general area. By 1913, amid citizen complaints about water service and pollution, the city placed a $248,000 bond issue before voters to provide funds to purchase and improve the system to serve a city of 14,000.

The bond measure passed, and the municipal water system began operation in 1914. As Glendale grew by annexation, other water companies were purchased and added to the system.

During its first five years of operation, the municipal water system relied almost entirely upon water flowing by gravity from Verdugo Canyon. As the city expanded, the utility turned to local groundwater wells to meet additional needs. 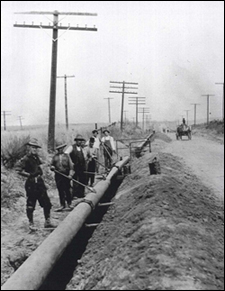 The aqueduct was completed in 1941, and in 1946 Glendale first tapped into its Metropolitan source. The amount of water purchased from Metropolitan increased over the years, and today accounts for almost two-thirds of our supply. Additional supplies come from local sources, including groundwater. Glendale also uses treated, recycled water for irrigation and street cleaning.

As the decades passed, GWP also made significant improvements to our water storage and distribution system, and in 2008 identified all capital improvement projects necessary to further improve the system over the next 20 years. We make water quality our highest priority, and meet or exceed all standards to ensure the safety of water served to our customers.

Today GWP offers a wide array of programs to help our customers save water and energy and benefit the environment. As we begin our second century of service, we embark in 2010 on our Smart Grid project, with Smart Meters that will allow for two-way communication between our customers and the utility, and for the first time will provide customers with real-time usage data to help them conserve energy and water.

We’re proud to continue to be in the forefront of innovative measures that benefit Glendale’s businesses, residents and the environment, and look forward to our next 100 years of service and beyond!