Glendale, CA: The Glendale Police Department arrested Sergio Castillo of Los Angeles for residential burglary in the 1700 block of Hillside Drive in the City of Glendale.

On April 13, 2019 at 3:44 pm, Glendale officers responded to the 1700 block of Hillside Drive regarding a male who made entry into the home. The investigation revealed, children at the residence alerted their parents that there was an unknown male in the living room. The residents saw the male from different vantage points sitting on the couch with a remote control watching television. The residents yelled at the male and then safely ran from the property with their three young children to a neighbor’s home where they called the Glendale Police Department.

Glendale officers quickly arrived on scene and contained the area. Officers could see the suspect through the windows walking in the kitchen area and eating food.  Officers attempted to communicate with the suspect both telephonically and through announcements numerous times, however, the suspect refused to exit.

A search team entered the home and the suspect was located in a back room and taken into custody with the assistance of the Burbank Police Department K-9 Unit.

A walk through of the home revealed Castillo had consumed food that the resident had just purchased from the grocery store.  Bedroom drawers had been rummaged through and a candle had been lit. Located outside the home was a black bicycle by the living room where Castillo was first seen.

The suspect was identified as 27 year old Sergio Castillo of Los Angeles.  A records check revealed Castillo was on parole and he had a no bail warrant for a parole violation. 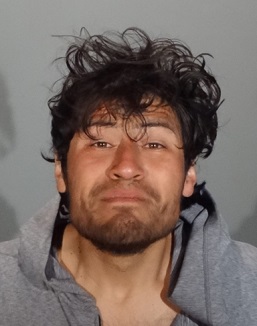