The Glendale Police Department is requesting the public’s assistance with identifying two suspects involved in a commercial burglary.

On Friday, February 22, 2019 at 4:43 am, a commercial burglary occurred in the 1300 block of East Colorado Street in the City of Glendale. The suspect vehicle parked to the front of the business and a male exited the driver’s door and smashed the front glass door. The male pulled a small motorcycle valued at $2,124.00 through the door and loaded the motorcycle into the rear of a 4Runner with the assistance of a female companion. The 4Runner drove off W/B on Colorado Street.

The suspect vehicle is described as an approximate 2001 Toyota 4Runner, dark color with four doors and a sunroof.

If you have information that can assist with identifying the suspects in this case, please contact Detective Shaun Carlson at 818-548-2097. 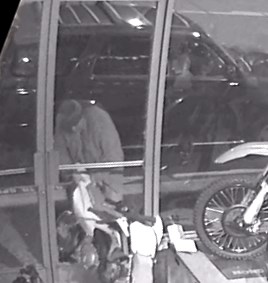